Greystones Bowling Club came into existence on the 4th September 1985. Its first formal committee was elected at a meeting called by Joe Sweeney, a town councillor, on behalf of a number of interested individuals led by Frankie Ward. Joe was elected interim chairman of the group at this meeting. Mr. M. Jacobsen undertook the task of acting secretary.

Shay Ryan of Bray bowling club attended the meeting and assisted those present by answering the many questions posed to him regarding the nature and structure of the sport in Ireland. He also undertook the job of acting as interim liaison officer with the Bowling League of Ireland (BLI). A special formation meeting took place a month later when Michael Seavers took up the position of vice chairman, and effectively the chairmanship, for the following year. Eileen Spurling became treasurer, and Imelda Walsh the club captain. 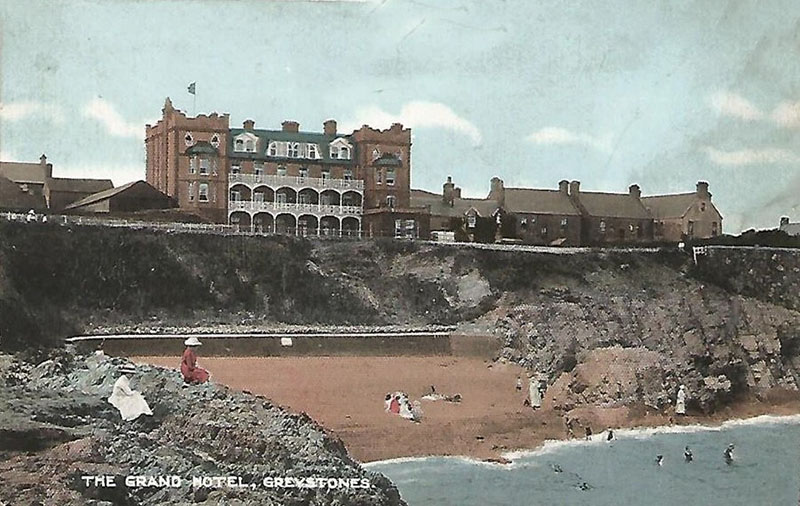 Offers were received from both the La Touche and the Woodlands hotels to provide temporary grounds for the club.

The Woodlands was chosen.

Over the following months the members played indoor bowls in the hotel ballroom while building a grass green in the grounds outside. Work on the outdoor facility was carried out by a team of volunteers under the management of the greens committee. By summer the members were able to practice and play outdoors. A high point in the season was hosting a visit from officers of the Bowling League of Ireland, with members of the town council in attendance.

An exceptionally enjoyable period followed with internal club competitions being played out for the first time by a group of men and women, who, for the most part had never held a bowl before. The social atmosphere was superb and the club appeared to be set for success. However unfortunate circumstances were to bring the period to an abrupt end. The proprietors of the hotel could not grant a lease to the group. The best that they could offer was a short term licence to play without any certainty of tenure.

This left the club with a serious dilemma. Less than two years after its formation the members had to choose between bowling in the Woodlands without any guarantee of a future or to seek a new home with some degree of security. The latter choice meant that resources could be directed towards provision of a future green. However it also meant the members would have nowhere to bowl in the intervening period. After much passionate debate it was decided by a substantial majority at a general meeting of the membership to opt for the long term view. This was a very low point in the clubï¿½s history. The bulk of the membership left. However a small group of determined people decided to keep the club alive by bowling indoors at the La Touche Hotel.

The new committee became very active and over a relatively short period many of those who had left rejoined the group. Some held dual club membership playing outdoors with Bray while supporting the continuation of Greystones. Renewed with fresh energy the club launched into fund raising and lobbying for a new home outdoors. Every method imaginable was used to raise funds including beetle drives, summer fairs, and race nights. Some of the fund raising exercises helped the social interaction between members as well as bringing in much needed funds.

The county council and other public bodies were lobbied intensely for assistance in finding a suitable new home. The process was time consuming but the club officials met with a very positive response from both officials and councillors at town and county level. On the sporting front the ladies and the men had joined the Ladies Bowling League of Ireland (LBLI) and the BLI as full members.

After a great deal of contact with other clubs it was agreed with Bray Bowling Club that Greystones could use their green for its internal championships. In addition the ladies organised a series of friendly games with other clubs in the LBLI. This helped to acquaint members with the standing protocols and practices of the game. The menï¿½s section was accommodated for league games by Dun Laoghaire.

By 1992 the development committee was able to report that its job was complete. A green which had cost some ï¿½50,000 was finished. An extraordinary proportion, some 40%, of this sum had been provided by voluntary labour. ï¿½7,500 had been received from public funds and the balance had been raised by the members. In 1995, the tenth anniversary of the clubs foundation, Presidents Jim Duff of the BLI and Kathleen Savage of the LBLI, officially opened the new grounds.

In the intervening years the club has taken its place among the bowling fraternity. It has played a role at every level of the sport. It has provided Presidents and other officials for both the BLI and the LBLI, the sports highest administrative bodies in the Republic of Ireland. At competitive level Jim Hayden became the first Greystones member to win an individual national title. Many other such successes followed for both men and women. The ladies section has played at division one level and indeed all teams, men and women alike, have excelled over the years winning numerous titles and awards. It has been a long and hard journey but it has been worth the effort. Many challenges face us once again, but if the future is a good as the past the club should continue to prosper and provide an enjoyable sporting and social environment for its members for many years to come.

What the club will do with your personal data

Under the General Data Protection Regulation (GDPR), and other data regulations, Greystones Bowling Club must obtain your explicit consent to use your personal information, known as 'Personal Data'. Personal Data includes, but is not limited to, your name, address, telephone number and email address.
To find out more click this link:
GBC Data Privacy Notice